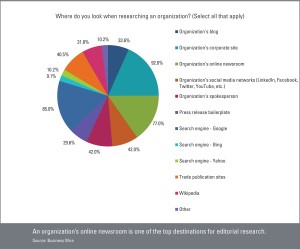 The answer from a new Business Wire survey is a resounding yes. Its survey of 300 journalists found 9 out of 10 had used a press release in the preceding week. While there is increasing focus on social media to speak to a wide constituency, only 1 percent of the journalists surveyed by Business Wire said they wanted to be pitched through social channels; 22 percent preferred news releases for pitching.

It’s hard to generate interest in a topic in 140 characters or less. A well-written, concise press release can make the difference in attracting reporters’ attention before they hit the delete button on their computer or mobile device.

In addition, 70 percent of respondents said their jobs would be harder without press releases. Providing accurate and relevant background in a press release – which couldn’t be done in a short social media post — helps ensure the resulting story is more accurate. That is a key challenge today with reporters juggling so many demands for content for the web and print editions. At many publications, journalists are given little time to research and check the facts in their stories. As a result, providing context, background and/or explanations for technical terms and other complex topics are a big help for most reporters.

Of course, many reporters will tell you they don’t wish to be pitched at all. This is understandable given the large number of pitches they receive on a daily basis that have nothing to do with the subject matter they cover. Ensuring the pitches are on target and having pre-existing relationships with reporters make a big difference in the success of suggesting story topics to journalists.

Of course, social media is about much more than journalists. It’s really aimed at building a community, and journalists aren’t necessarily a preferred demographic of that community. But it’s clear that social media helps with media outreach as well. Moreover, websites and online newsrooms remain an important source of information for journalists.

Business Wire is a service for distributing press releases, so some may question its findings in support of continued usage of the press release. But the findings jibe with other surveys, including an Indiana University survey earlier this year that found journalists used social media to stay informed and monitor competition: About three-fourths used social media to check breaking news and see what other news organizations were doing.

Given that this is how they are using social media, it is perhaps no surprise to find that nearly 60 percent said they did use social media to identify story ideas, interact with audiences and/or find additional information about a topic. Breaking news and the competitors’ focus on a topic will always drive coverage; reporters always look to the competition to be sure they have covered what’s breaking and hit all the key points in a story. The challenge is getting the media’s attention in the first place. For that, a well-written press release, a targeted pitch and/or a well-placed phone call with follow-up information continue to be vital to getting the media’s attention.

At the time they replied, 90 percent of journalists surveyed had used a press release in the previous week, and 53 percent said they used newswire content one or more times a day.