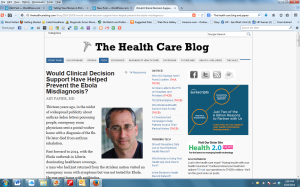 Art Papier, the founder and CEO of Logical Images, the company that created VisualDx, writes in The Health Care Blog about how clinical decision support tools could help prevent the misdiagnosis we saw with the first case of Ebola in the U.S. On the patient’s first trip to the hospital, the Emergency Department physicians misdiagnosed his ailment, gave him antibiotics and sent him home, where he could potentially infect his family and friends with the deadly virus. The Institute of Medicine in 2010  recommended clinical decision support tools to prevent such misdiagnoses, but they’re still not available in many hospital ERs or clinics.

The Catalina Island Conservancy is getting attention for the new program it is launching for Avalon Schools’ students, called NatureWorks. It received a $200,000 grant from the Keck Foundation to give students hands-on environmental and ecological educational opportunities. 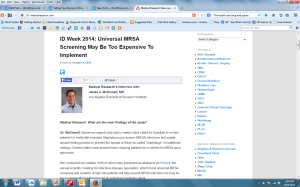 LA BioMed researcher James A. McKinnell describes the two abstract presentations on Friday about the high cost of preventing the hospital-acquired Superbug, MRSA. The preventive costs may exceed the potential savings, leading hospitals to avoid spending the money on preventive measures.

LA BioMed researcher David S. Plurad has generated widespread interest with his latest study, which found marijuana usage could mean lower death rates for people with traumatic brain injuries. Social media is buzzing with the news, which has been reported many places, including here and here.