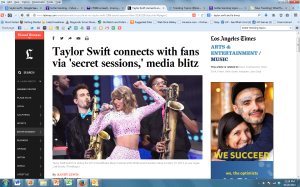 With numerous awards, sold-out concerts and one of the country’s biggest fan bases, Taylor Swift is a proven marketing phenom at the age of 24. The launch of her latest record, “1989,” offers even more examples of how she’s mastered the PR and marketing game, all of which can be instructive for marketing other products. Here are four key lessons to learn from this brilliant young woman and talented songwriter.

Know your audience: Taylor Swift knows her audience. Her songs speak to the hearts of young women with their tales of heartbreak and the challenges of fitting in with their peers. She’s been open about her gawkiness and nerdiness – all very relatable traits for any teen or young adult. As one 21-year-old fan told the LA Times, “She’s describing my life right now.”

Create a buzz: Taylor debuted her newest record with small “secret” listening parties for select groups of her biggest fans. She determined which fans would be included based on how much they post about her on Twitter, Instagram, Tumblr and other social media sites. This guaranteed the frequent posters would create a buzz among their peers with photos, tweets and more about this rare chance to meet in person with their favorite star.

Taylor’s also appearing on numerous TV and radio shows, including a coaching stint on the popular singing competition show, “The Voice.” All of these appearances are being widely promoted on social media by the programs hosting her and in broadcast ads, creating even more buzz about “1989.”

Capitalize on the mainstream media: While Taylor’s younger fans may never read the stories that appeared in numerous newspapers or watch ABC’s “Good Morning America” or the other news-related programs on which Taylor appeared, all of these stories and appearances create share-able content for the social media sites where Taylor’s fan base spends it time. Also, these are the places where she’s likely to catch the attention of her adult fans, many of whom admire her for reaching out to young people and avoiding the “bad girl” image that some of her peers have adopted.

Have a great product: While all of these are winning tactics for any product, perhaps most important of all is Taylor’s winning persona and the great product she is selling. She topped the country music charts in her teens and is winning over the pop music fans in her 20s with her great songwriting and performances. Having a great product maximizes the potential for all of these tactics to succeed beyond anyone’s expectations.